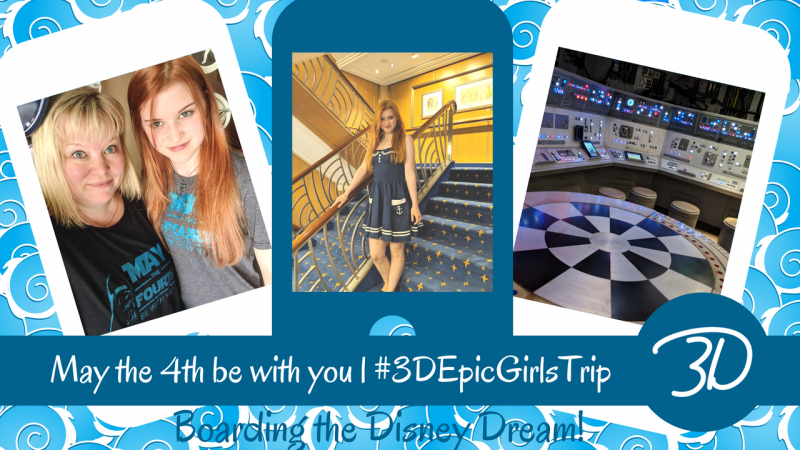 ​It's been 5 years since Hannah stepped aboard a Disney Cruise Ship. To say she was excited, is an understatement of gargantuan proportions!

We didn't even realize we were boarding on MAY THE 4TH (BE WITH YOU) until a month prior, but we still managed to make the most of our special cruise! 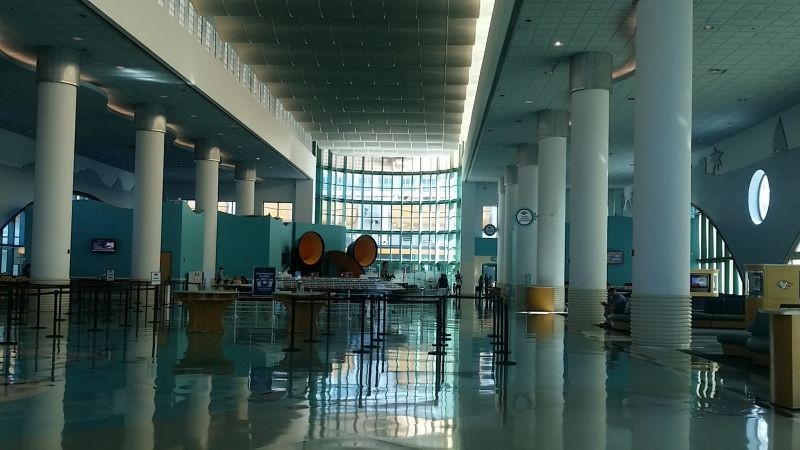 The terminal at Port Canaveral is the MOST magical! 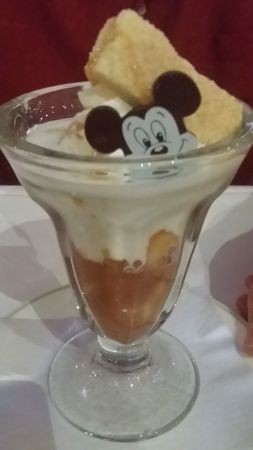 5 years after her last voyage, which was also a mother-daughter cruise, Hannah and I were boarding with a fellow owner and her daughter. As we got closer to the port, she started to bounce up & down, ready for ALL the things!

Having never parked at the port before, we learned the hard way to have our luggage organized and tagged before we pulled in. We passed the location where they would pull our luggage from the car and ended up lugging our big bags through parking and down the sidewalk. Sometimes, no matter how many times I read something, it doesn't sink in until I do it. This was one of those things.

We managed to drop off our luggage and get through security very quickly. Since I'm platinum, we were able to go straight to the Concierge check in and board as soon as we wished. It was my first time to enjoy that privilege and I'm definitely a fan!

Once aboard, we began the great gluttony goodness that is a Disney Cruise. As we entered the buffet, we were immediately helped with Hannah's dietary needs. It can be tough on her, even when people are so helpful, to get all the attention required to help her eat gluten-free. Thankfully, they have it down to a science on a Disney cruise, which eases the self-consciousness.

"Excuse me?" we asked, at the podium.
"Yes. How can I help you?" Hannah looked at me. She usually does it herself, but she was struggling.
"My daughter has celiac disease. We need to know what she can eat?"
"Oh. Yes! We can have a chef walk the line with you, and if you're comfortable to eat off the buffet then you'll know what's gluten free. If you're concerned about cross-contamination, we'll dish it up separately in the back."
"Wonderful! Thank you so much!"

Celiac sufferers have to have items that are certified gluten free with less than 64 parts per million. In layman's terms, cross contamination is a HUGE Issue. Hannah had her food cooked in the back. The rest of us dished up the goodness and sat at a table overlooking the sea.

About halfway through our meal, Hannah's meal arrived. One thing to keep in mind, when you order something from the back on a Disney Cruise, you will often get a LOT of food. Often, I won't eat very much until my celiac kiddos meals arrive, as I end up sharing with them. It's a bit of a job to cook and/or dish up food separately, so they make light work with bigger portions. 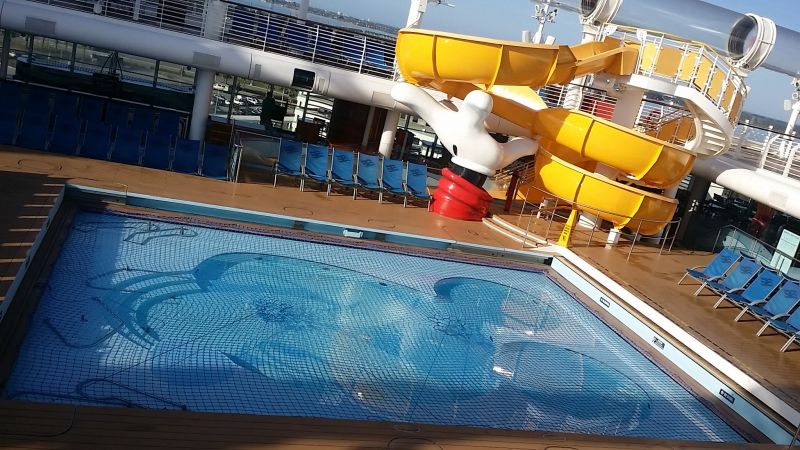 Imagine this pool, slide & chairs FULL of happy people. THAT is what it looks like when you board! 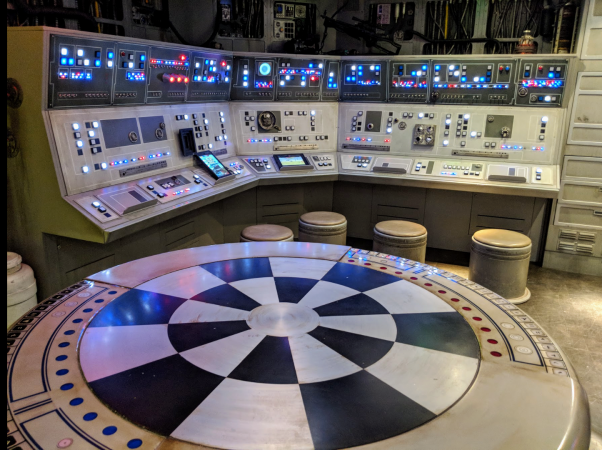 ​After stuffing ourselves silly, we headed to the Open House at the kids clubs. When the kids were younger, we would hit the area above on the first day & watch them have the best time! With endless drinks, pizza, burgers & soft serve ice cream, this is a kids dream. Now though, we take advantage of the kids clubs open house, when we're able to go in and play.

Even when I'm sailing just with adults, we go play in the kids clubs. It is NOT to be missed!

And now the Disney Dream has it where you can visit the interior of the Millenium Falcon. It is SO VERY COOL! Check out the video linked at the bottom of the post to see how you can meet R2D2 & pilot the ship. We still talk about it as one of the highlights of our trip.

Also in the kids clubs, we found all the fairies from the Tinkerbell series (so cute!) and played in Andy's room. I was sad to see we could no longer put pieces into the giant Potato Head. Perhaps they had trouble with that? They're now glued in place, instead. 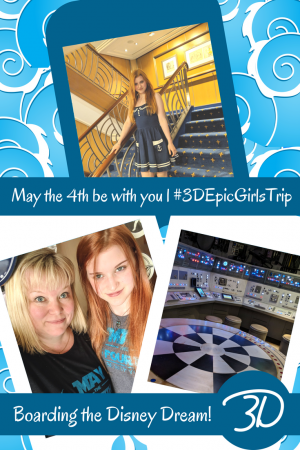 ​Once we'd finished playing, it was time to head out for the emergency drill. For the first time in my many cruises, I grew irritated with the amount of people missing from the drill. Typically, there are one or two in each group who don't realize how important it is to go to the drill. this time there were many, many.............many people.

Usually, I have an ongoing conversation in my head. I'm providing excuses for the missing people as I stand in straight lines, waiting for them to arrive so we can begin. Perhaps they have a sleeping child & only sent one person over? Maybe they haven't made it on the ship, yet? ("Oh, no!" I think. I pray for them to arrive.)

But this time, there were so many full families who ambled their way to join us, more than 30 minutes after the drill had begun. They arrived as if they didn't have a concern in the world, as if there weren't hundreds of people waiting for them to join us, so we could move on with our lives. One woman rolled her eyes at our group.

I can't make any excuses for that. Entitled much, lady in a sundress? I had to pray for myself now, not to be upset with this woman. Thankfully, I was able to get my own attitude under control fairly quickly and move on!

Because FUN was still to come! We skimmed by the sail away party (also a not-miss with younger kiddos) and watched the sea roll by from our verandah. Then, we dressed and headed to the show. We try very hard to NEVER miss the shows! After the show, we headed to one of the family activities, where Hannah was chosen. She is always chosen. I've watched her & this is how she does it.

HOW to be chosen as a volunteer during any show - the Hannah Scott way
Step one: Arrive early & get a seat with a good visual to the performers who may decide to choose someone to participate.
Step two: As soon as someone steps on the stage, make eye contact. Smile & laugh, be engaging to everyone who is performing. (To be fair to Hannah, she does this with ALL performers ALL The time.)
Step three: When the time comes to volunteer, give it your ALL. If you're supposed to dance, dance like no one is watching. If you're supposed to raise your hand, raise your whole self. Be ALL in!

After the show & my special moment on stage (she volunteered ME, too!) we met our serving team in the Enchanted Garden, where we were thrilled to be seated in one of the cute little round booths! Cherries arrived for Hannah's first shirley temple, then more and more cherries kept coming - all cruise long, in fact! Allergy dining is easy in the dining rooms & our server did a great job explaining the best way to make dining easy for us, throughout our trip.

The key to celiac and allergy dining on a Disney cruise is planning ahead. ​​​​​​​​​​​​​​​​​​​​​​​​​​​​​​​​Find out where your dining team is going the following day, and dine there. They'll do a special order for your breakfast and lunch, but they won't make it until you arrive and ask for it. They write it on a ticket and it is there, in the dining room, waiting for you.

You can also do this up on deck! Pre-order that pizza or burger, so you can eat and rest by the pool with everyone else. You'll even be able to send your order to Castaway Cay, Disney's private island. So good!