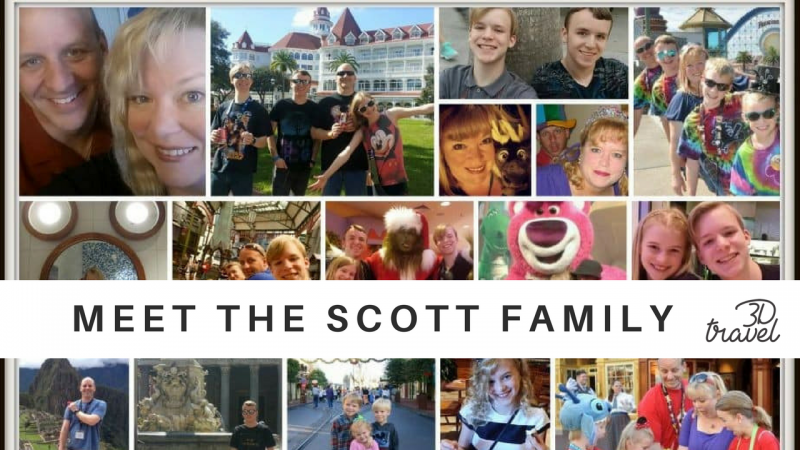 ​​David and Carol-Beth Scott founded 3D Travel in 2005 after a very eventful trip to Walt Disney World. Since then, they've had a grand adventure of giving and receiving experiences, the likes of which they never could have dreamed of when they took those first steps together on Main Street USA.

David is a firefighter/paramedic in North Texas - over 20 years now!  David grew up in the backyard of Walt's original park, Disneyland.  He remembers collecting cans  when he was a child to earn money for tickets.  He visited both Disneyland and Walt Disney World many times while growing up, then took Carol-Beth on their honeymoon for her first visit to Walt Disney World.  And the rest, as they say, was history....

Carol-Beth fell in love with Walt Disney World during her honeymoon, but couldn't imagine being able to afford another trip. Daily life and surviving living on a firefighter's salary while staying home and homeschooling her three small children were the main focus of her life, until tragedy struck their family and she realized that life isn't just about surviving.  Their entire family went to Disney to get a new starting point, to breathe again, to begin healing.  And they did!

In 2005, after Carol-Beth returned home, she wanted to help other families who might not think they can afford it, visit the most Magical Place on Earth.  And she did!  In two years she'd formed a thriving agency with hundreds of clients, and quickly realized she was drowning as a one woman show.

In 2007, The next great decision Carol-Beth made (in the middle of a lot of attempts and failures, of course!) was bringing aboard some of her best clients as 3D's first round of agents.  Not only did the first 4 people she brought aboard become amazing agents and leaders in the travel industry, they became some of her dearest friends.

Since the expansion of 3D Travel began, David and Carol-Beth have experienced more joy and triumph than they ever dreamed possible.  In the meantime, they TRAVELED!

The Scott family has been to Walt Disney World, staying in all resorts except Disney's Boardwalk Resort, many times.  There isn't anything wrong with the Boardwalk and it's on their list.  They've sailed aboard all 4 Disney Cruise Line ships, including pre-cruises, christening cruises and re-imagined cruises as the ships were brand new or refurbished in dry dock.  They've expanded their Disney travels to include Disneyland Resort many times over, and now aren't sure which coast holds the best park.  Have you seen Cars Land?

Carol-Beth is currently serving as a member of the Earmarked Travel Advisory Council with Walt Disney Travel Company, is pleased to have been part of the original group with the Universal Orlando Resort Travel Alliance and is thrilled to have expanded the people she cares about even more, as she finds more and more people to care about in the travel industry, both professionals who work with vendors and the amazing agency owners and agents who don't compete with her - they make her better!

David and Carol-Beth have 3 children who've grown up traveling alongside them - Joshua, Noah and Hannah.