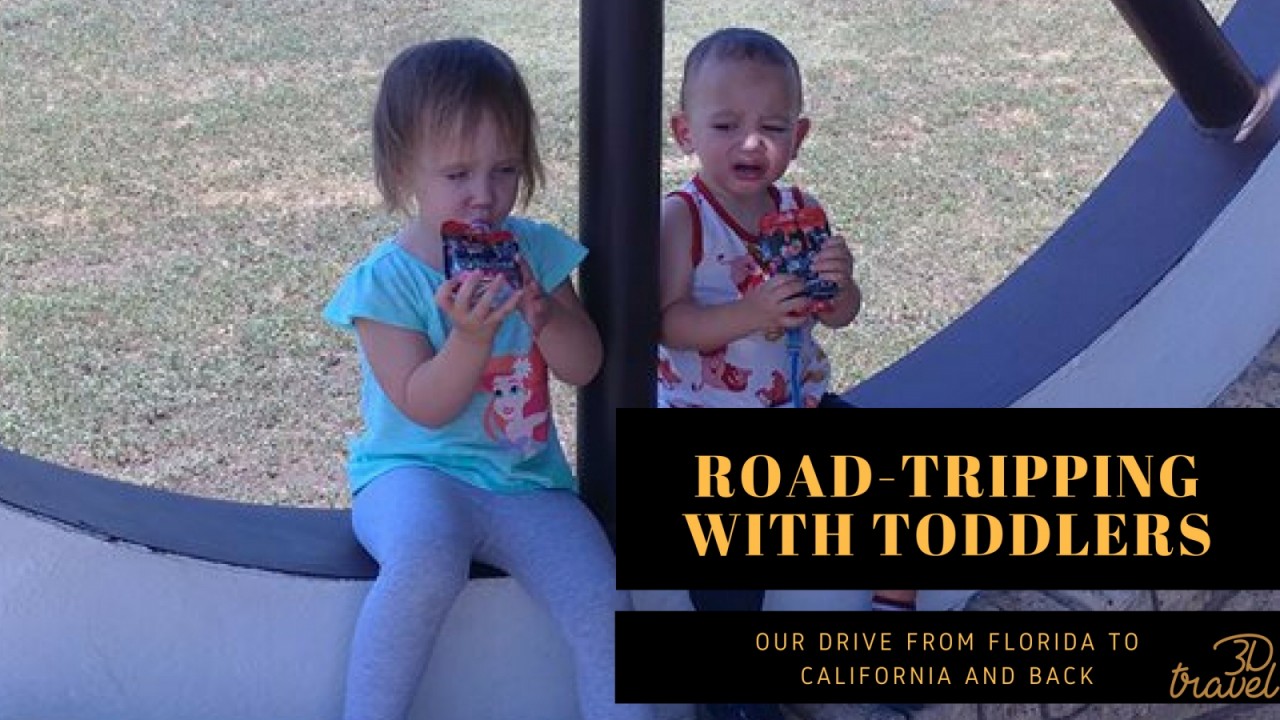 When my husband (Dakota) and I started planning our trip to California, we very quickly decided to we would be driving.  I told everyone that it would be super fun, and it would make it easier to transport all of the necessary supplies needed for two toddlers.  Dakota told everyone that it would be terrible.  One thing's for sure, it will be a trip we never forget!  But here's how we did ti, and the little tricks we found that made it easier. 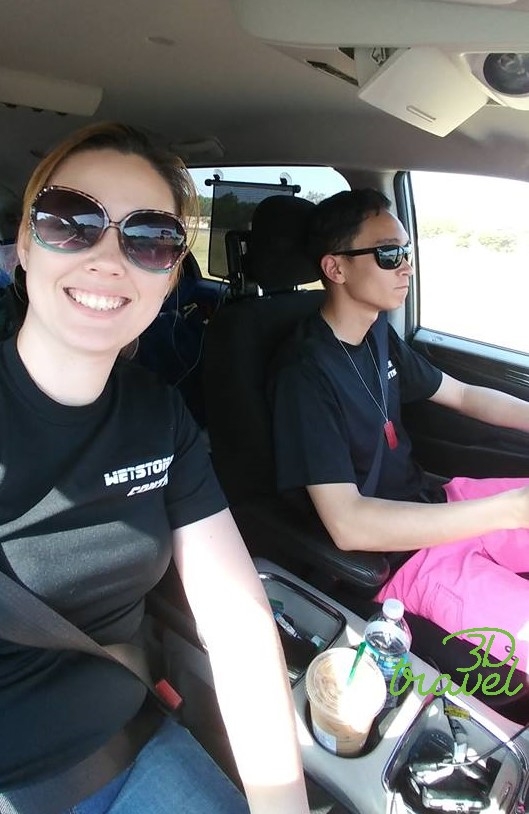 Dakota and I as we hit the road!

We left California the afternoon of June 1st.  Our plan was to just drive, drive, drive.  While one adult drives, the other one is sleeping or helping to keep the kids happy.  We had a portable DVD player (we have one that has 2 separate screens that attach to the headrests), and it was always playing a movie out of a selection of about 15 we brought from home.  FIRST RULE OF ROAD-TRIPPING:  Keep them entertained!!!  Since they are too young for car games, movies and stuffed animals were the way to go. 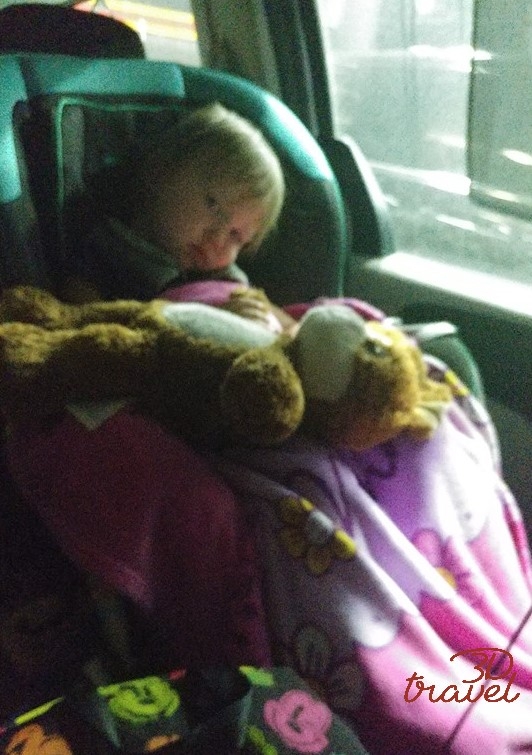 We kept dinner simple and went through a McDonald's drive thru, and then hit a rest area to change the kids into their PJ's and let them run around before bed.   This first night was a little rough.  Our daughter couldn't sleep well unless the movie was playing, because waking up in the dark scared her.  However our son couldn't sleep well if the movie was on, because the light from the screen kept him awake.  Once we remembered that we could unplug his screen from hers, it gave each child what they needed, and it was a big relief to us!  Both kids slept soundly, and we made great time, entering San Antonio a little after sunrise. 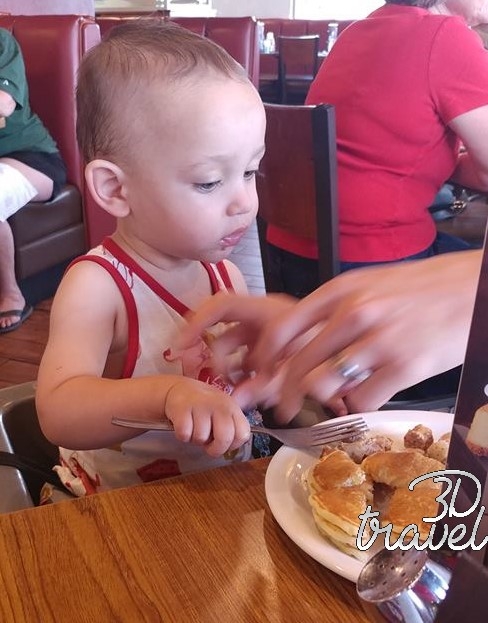 Scott trying to cut his pancake 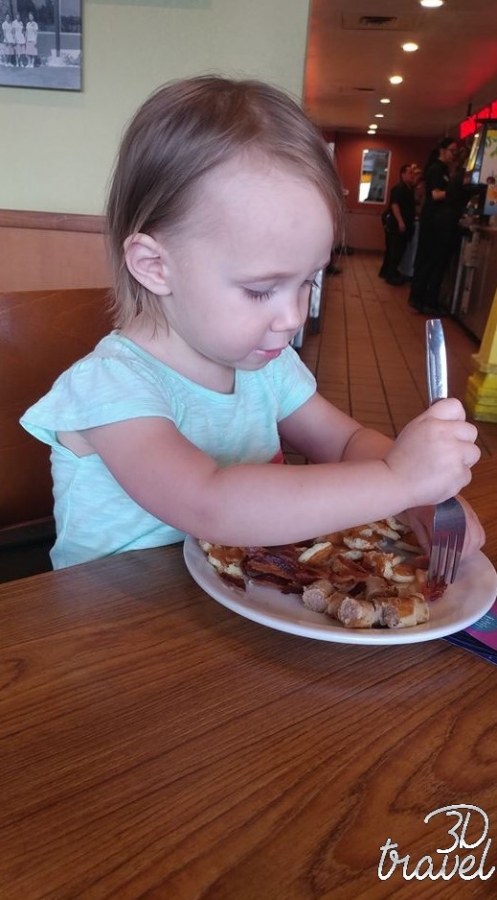 This is where we found our favorite rest area EVER; the Guadalupe County Rest area (see my blog post for more details about this amazing I-10 gem!).  We used this rest area to get the kids changed, and let them play on a playground while we stretched out.  Breakfast that morning was Denny's, where we fueled up and got the kids ready for a long day of driving.  ROAD TRIP TIP NUMBER 2:  Stop at a sit-down eating establishment on occasion.  This isn't just for your sanity, but the car needs a break as well.  It's also nice to get a real meal in, instead of living off of fast food burgers the entire trip. 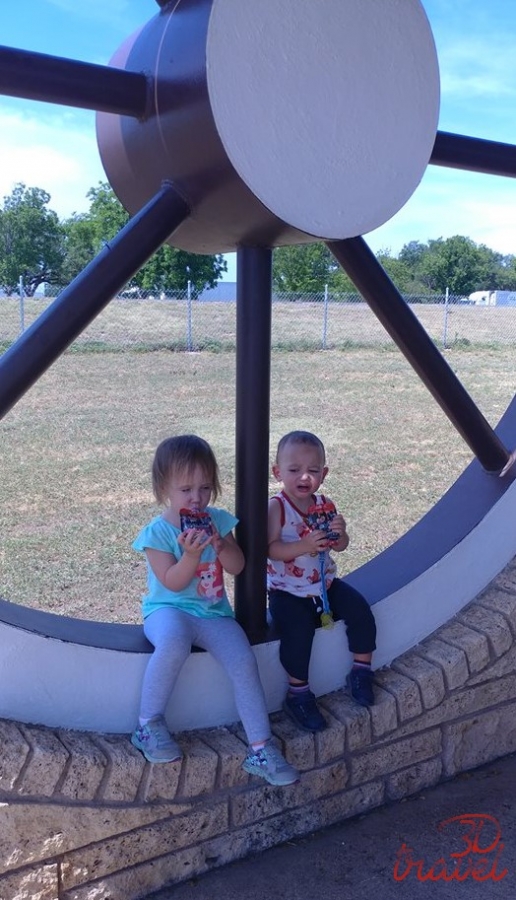 The kids in West Texas

After a much needed breakfast stop, we embarked on what became our least favorite part of the drive...West Texas.  The Western half of Texas is nothing but insane heat, and almost no places to stop for gas or food.  There are almost no rest areas from San Antonio to El Paso as well. There are picnic spots about every 100 miles, but these areas do not have restrooms.  The few rest areas where the restrooms are located do not have changing tables, so be prepared to have an area in the vehicle where you can change little ones.  With the summer heat, we couldn't let the kids run around very much when we stopped at these areas (the temperature was over 110 degrees by about 10 am).  We were not only concerned about them overheating, but also that they could burn themselves on the hot pavement.  ROAD TRIP TIP NUMBER 3:  Stop for gas at every gas station in West Texas!  You DO NOT want to run out of gas here. 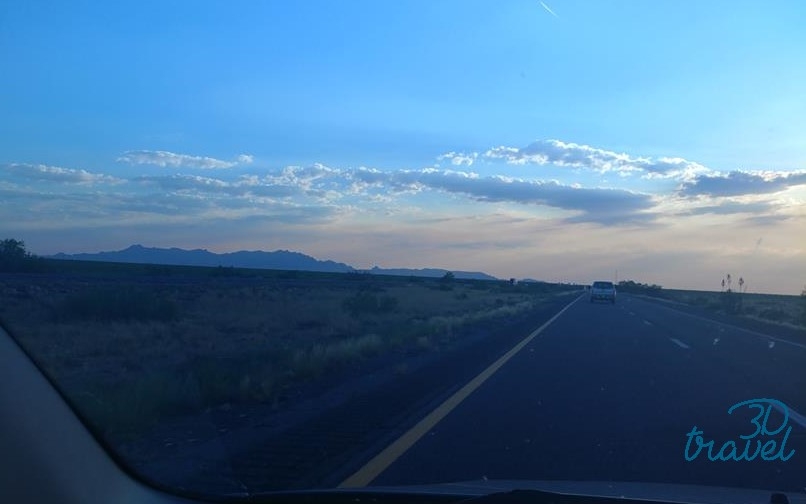 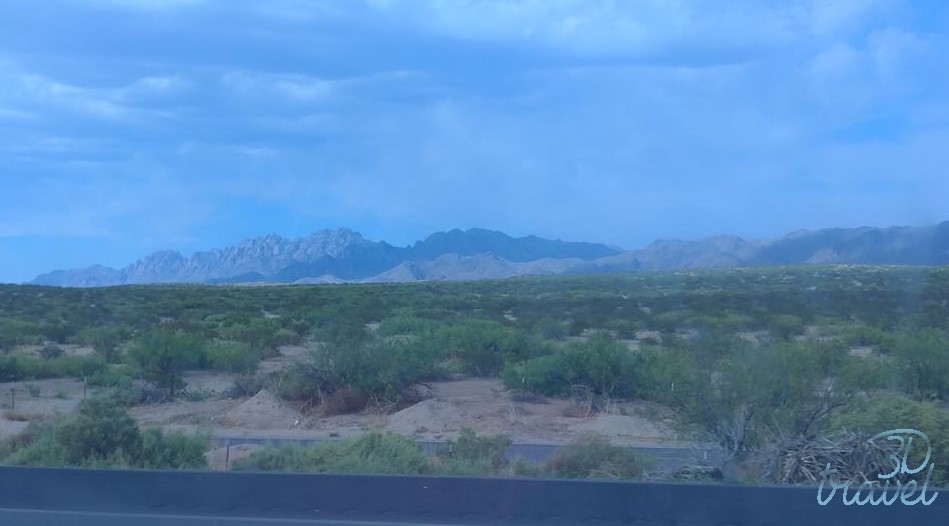 After the never-ending drive through West Texas, we finally entered New Mexico.  We were blown away by how beautiful this state was.  The pictures don't do it justice.  We stopped at an Applebees for dinner, and enjoyed the nice break after being cramped in the car for most of the day.  We even spoiled the kids with some chocolate milk before getting them dressed for bed.  We watched the sun set below the New Mexican mountains, and then entered Arizona as we drove through the night again.  When the sun came up, we were in Pasadena, California and made it to Dakota's childhood home an hour later.  In total, we were able to do the drive in about 40 hours.  I drove most of the day shift, while Dakota slept so that he could take over for the night shift.  In the end, it worked out great, and the kids did extremely well with the drive too. 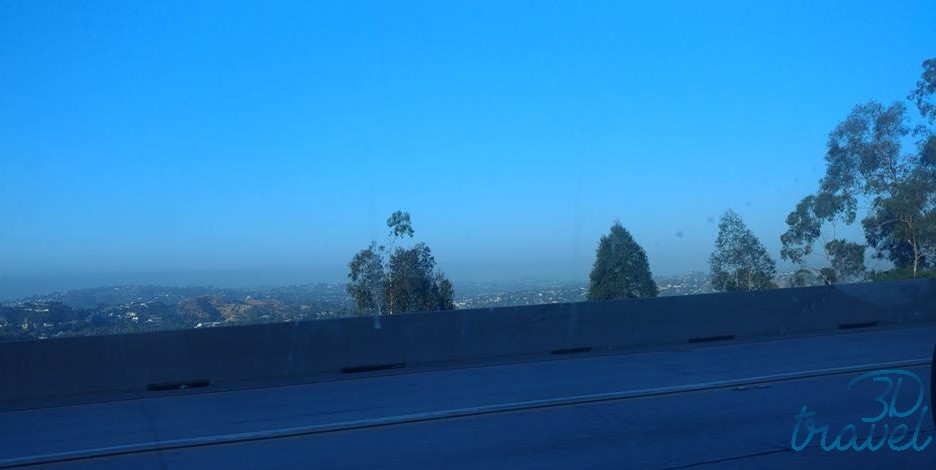 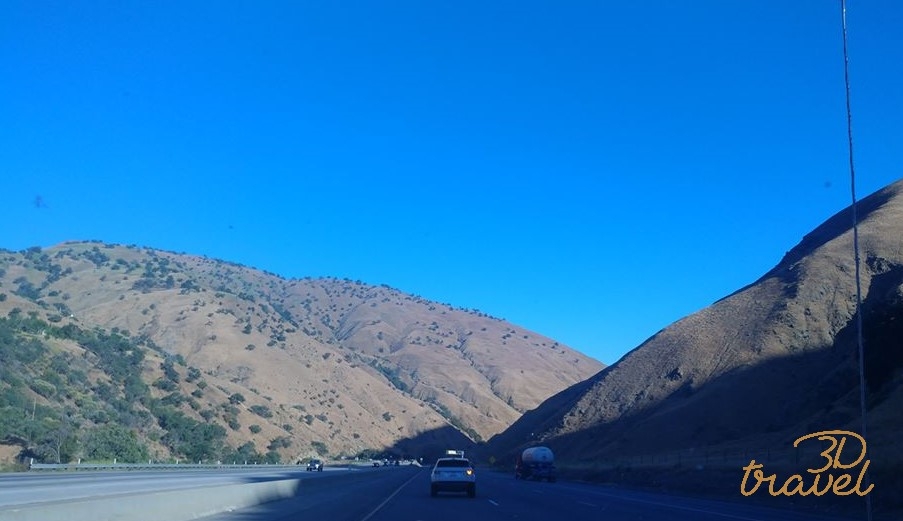 The "Grapevine" in California

​After an amazing 3 weeks in California, we started the drive back home to Florida.  There were only 2 major differences between our trip to California and our return trip.  The first was that unlike the trip out, on our return trip we hit rush hour traffic in Phoenix, San Antonio, and Houston.  The amazing time we were making was instantly crushed by the 4 hours we spent in traffic.  ROAD TRIP TIP NUMBER 4:  Don't sit in the traffic like we did - pull over and eat and/or take a break.  Sitting in the traffic is not a mistake I will make again. 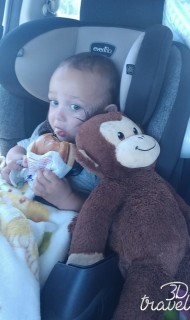 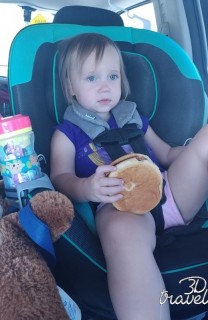 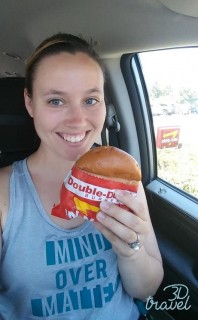 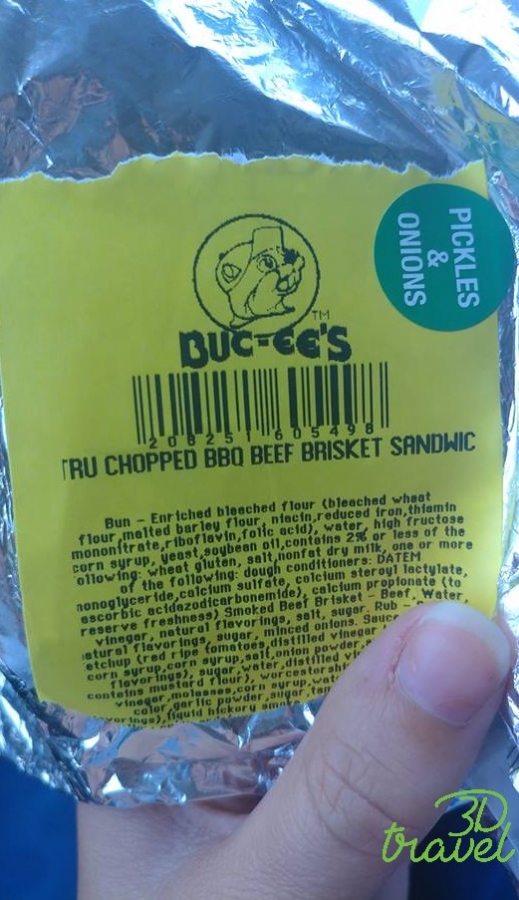 The second difference with the return trip was the mandatory trip to BUC-CEES!  A Texas staple, BUC-CEES is a must do for my family when we are in Texas.  I made 2 separate stops!  They have the cleanest restrooms, made to order food and prepped sandwiches and sides, and tons of merchandise.  There's dozens of spots to fill up the gas tank, and a massive parking lot.  BUC-CEES is like the Target of gas stations.

And there you have it!  This is how my family survived road-tripping with 2 toddlers, and the things we learned along he way.  Stay tuned for more of our toddling antics! 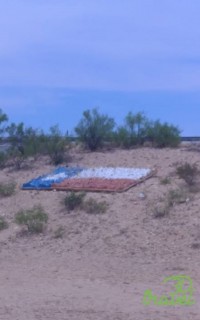 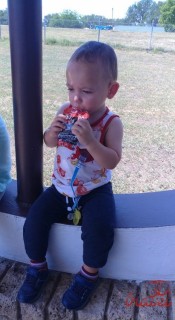 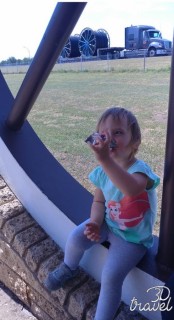