How one bus ride changed our bad day (and our attitude) in Victoria, British Columbia 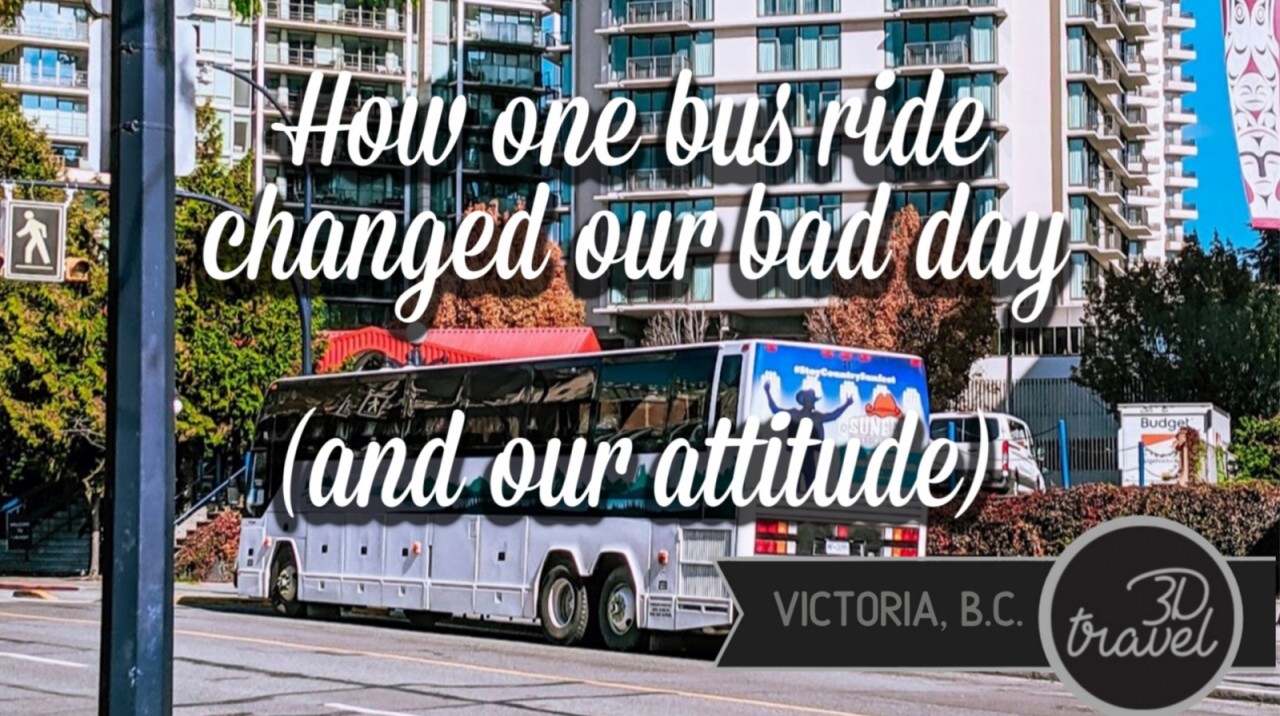 ​From the moment we woke up that day, we had an attitude.
It wasn't anyone's fault but our own & we didn't know the cure was a big dose of Canadians.
But it was! It absolutely was! 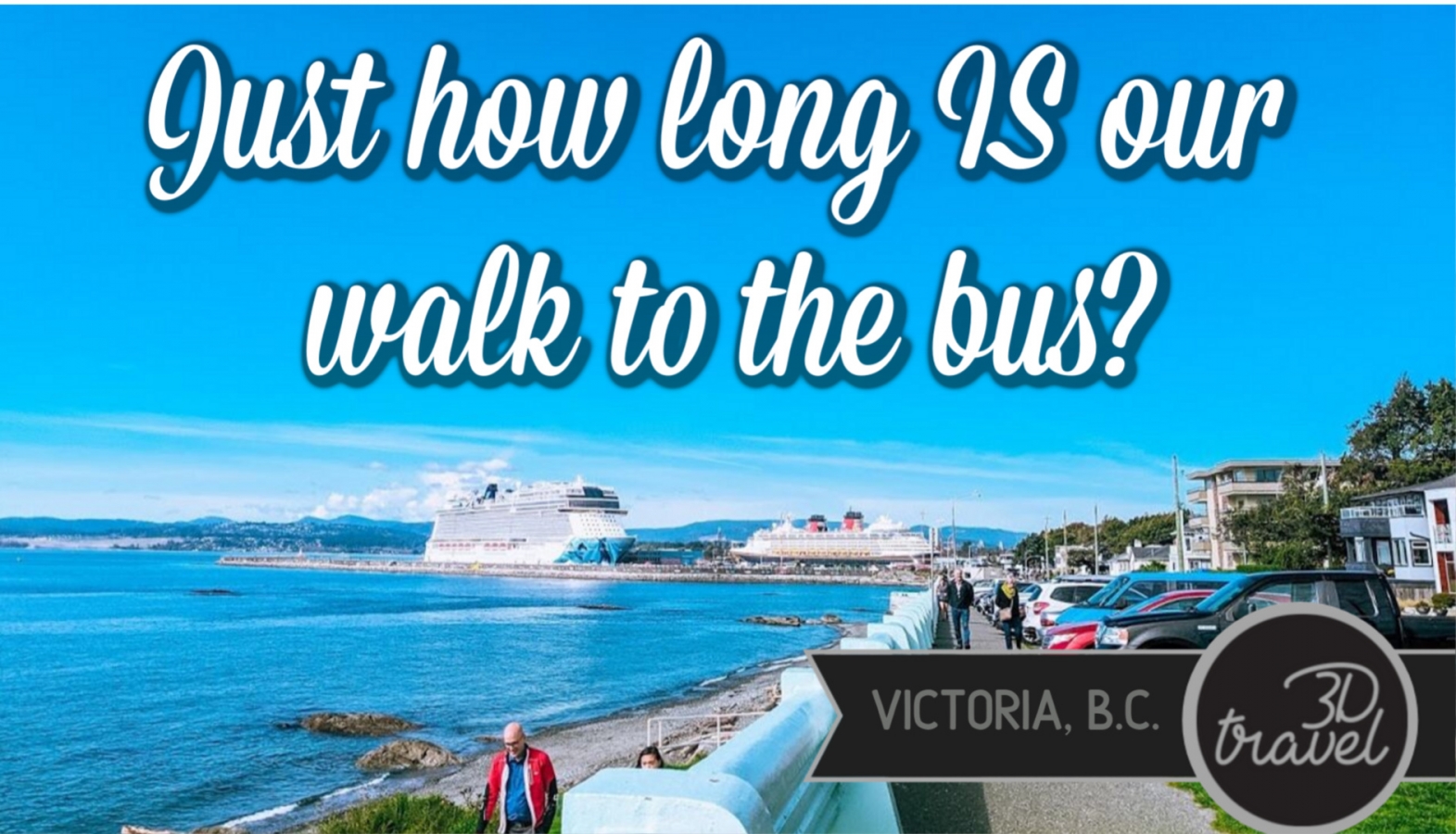 ​​The Norwegian Bliss had departed from Canada with Hannah & I on board as part of a Seminar at Sea. Amazing itinerary touching the West coast and parts of Canada + the two of us usually have a great time together. After a series of travel mishaps we'd let our attitude turn for the worse, because.......you know......we're human. We were hopping off the ship in Victoria to have Tea at the Empress and the myriad of transportation options to get there confused us a bit, but we thought we could walk to the bus stop. Who isn't excited about a bus ride, am I right? There was a chill in the air and it really was a beautiful day. We just were NOT feeling it!

There are no tenders (boats between ship and shore) in Victoria, and we walked straight off and to a tourist booth. I looked at the map and it seemed like the bus stop was close. We took the footpath to the right, curving between the ocean shore and local neighborhoods. As we walked, I realized we still weren't in vacation mode. At ALL. We weren't relaxed. We weren't present. We were tense and stressed and honestly, while wandering someplace when I'm in a good mood feels like an adventure, when I'm in a bad mood it just feels annoying.

I told you. Attitude!
So. Much. Attitude.
Picturing it? You're right. It's NOT pretty.

And as we walked and walked, I started to feel the need to find a bathroom as I got further and further from the ship. This was not going to help me get my act together. Thankfully, the Canadian cavalry was coming to rescue me. 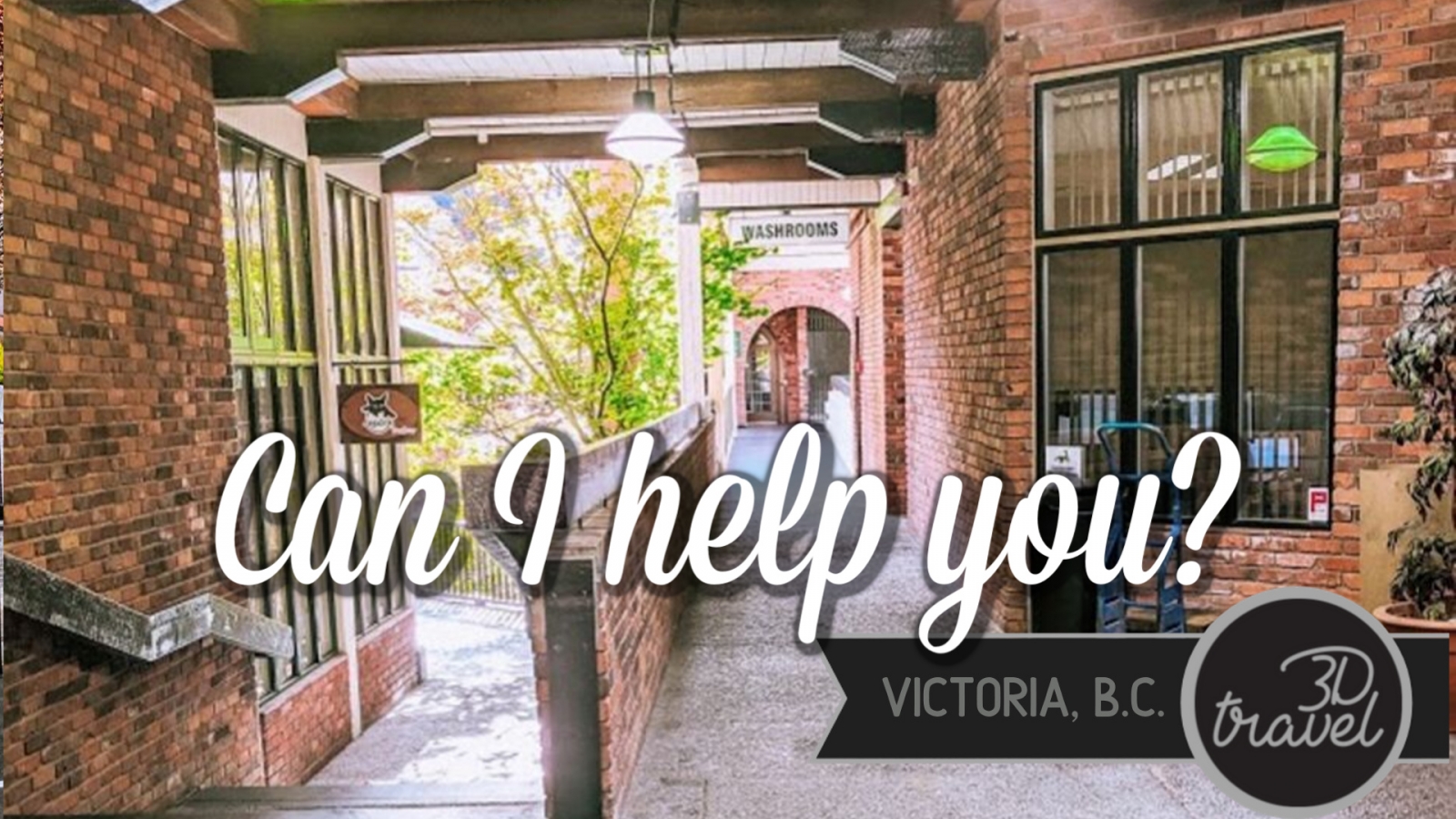 I discovered later we were nearly at the bus stop at this point, but we didn't know at the time as we turned into a neighborhood so we could be pointed to the city center & maybe (hopefully) bathrooms. Honestly, on some level we were very much enjoying the beautiful community we walked through, the signs and the structures. Just not in the way we normally would. We pulled out the two giant maps we picked up at the booth & looked every inch the part of lost tourist as we tried to determine the quickest route. Unfortunately, neither map had bus stops marked. "Of course, they don't." said the ugly monster growling inside me.

I looked up to see people of all ages on bikes in the distance and one gentleman who looked to be in his 70's who spun around and came back to help us. It was clear by his pace he had somewhere he needed to go, but it was even more clear he didn't hesitate to take care of us, nor would he ever be kept from helping others. I was immediately touched by his kindness and sweet spirit. And that was just the beginning..... 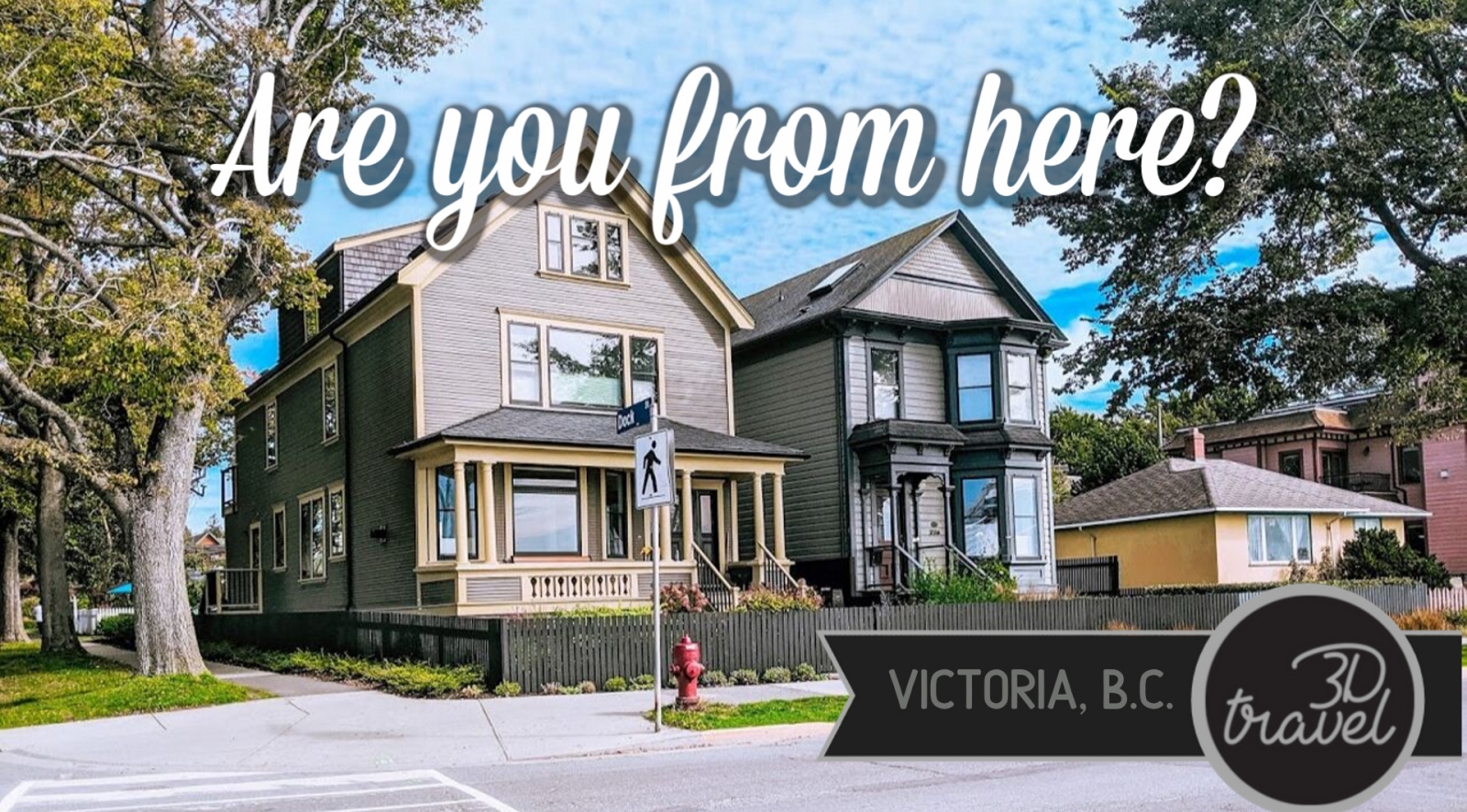 It's funny how every person we interacted with that day started with the same question. "Are you from here?" when it could NOT have been more obvious that we were not. Giant maps were in front of our faces as we headed from port to who knows where. But that's exactly how this first gentleman began our conversation. By the time we were through, we knew where the bus stop was, his name, what a beautiful day we had to enjoy, the liquor store location "in case Hannah was too much for me," he said - ha! and that this day was going to be a better time than we'd been expecting.

I got to thinking as the day went on, what a kind way it was to ask someone if they needed help or consideration. "Are you from here?" It doesn't put anyone on the defense and allows them the ability to define themselves as they wish. Genius, I tell you! Canadian genius!

As we approached the bus stop, we quickly knew we needed more information to take the right path. We sat down and Hannah people watched while I used my phone's browser to find out all about the bus routes. Within minutes, Hannah had a new friend. She looked to be older than the gentleman who'd gotten us this far. By the time we boarded the bus together, me having quickly put my phone away as she appointed herself to take care of us, we knew this nice lady's name and where she lived. We heard all about her granddaughter who is studying to be a physicist in the states. She misses her. She misses her children, and she's all alone in British Columbia. If we moved there, I'm positive she and Hannah would have a weekly teatime with a brisk walk while they chatted. And we were only on Canadian person #2! Little did I know, I was about to be moved to tears in the back of the very bus we were boarding with Hannah's new friend. 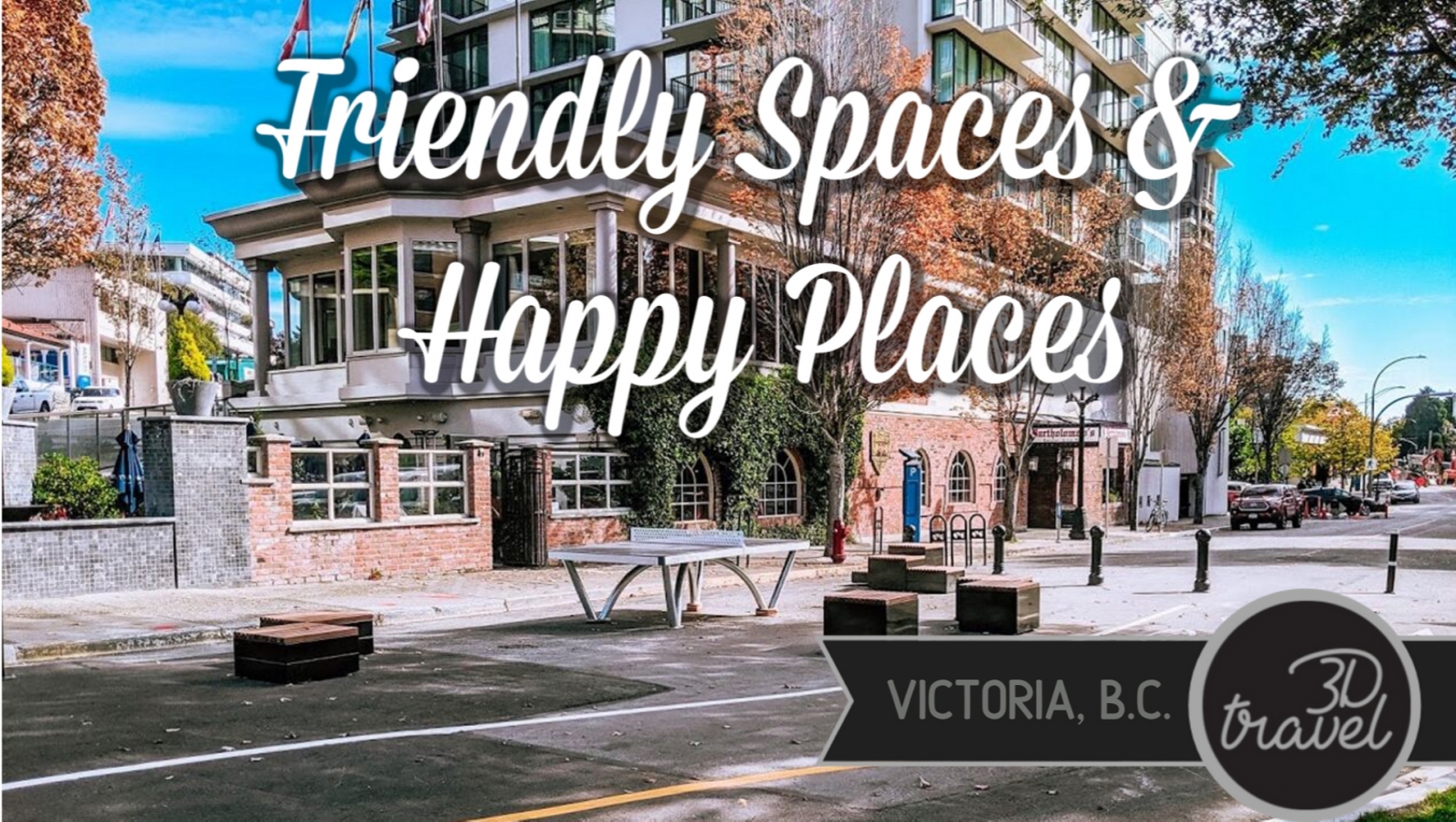 For the record, our bad attitudes were LONG GONE by this point. It really takes such a small amount of kindness to turn most of us around and we'd been smothered in it - twice! Our shoulders relaxed, we were laughing regularly and finally enjoying each moment as we spent it together.

As we waited to board the bus, another local came by with their unused day pass and pressed it in my hand. "No need to pay for one. You can use mine!" At this point, I began to feel overwhelmed. It's only $6 for a day pass, but that's really not the point is it? Everyone we encountered seemed unmatched in their sweetness, thoughtfulness and generosity. It was like the whole area was acting as host.

And most importantly, it felt authentic. I love Southerners individually, but we all know what "Bless your heart" means and it is NOT a kindness. And often we still struggle here with exclusivity.  It felt different to be here. It felt better. Of the people we'd interacted with so far, the gentleman was Asian-Pacific, Hannah's new BFF was from India & the lady who gave me the pass was of European descent. Then as we boarded the bus a black gentleman offered me his seat before I even bought our 2nd ticket. In the process, the (unknown origin) bus driver realized we weren't from there and immediately gave me every piece of information I needed to know. Hannah sat by her buddy while I spied some elevated seats in the back where I could people watch and scenery watch at the same time. As I made my way back, every single man hopped up to give me his seat. Every.Single.One. Every color interacted with me and each other, laughing and sharing, making it feel like a family reunion of people who actually liked each other.

Reader, at this point I was barely holding it together. I was overwhelmed by their kindness. Nearly every man who offered me a seat were from my parent's generation, not mine. As I smiled and showed them with a nod where I was headed, they stepped out of the way and smiled back. I felt myself tear up and took some recovering breaths as I sat down and digested this level of thoughtfulness. Little did I know, Hannah's experience at the front of the bus was even better than mine. 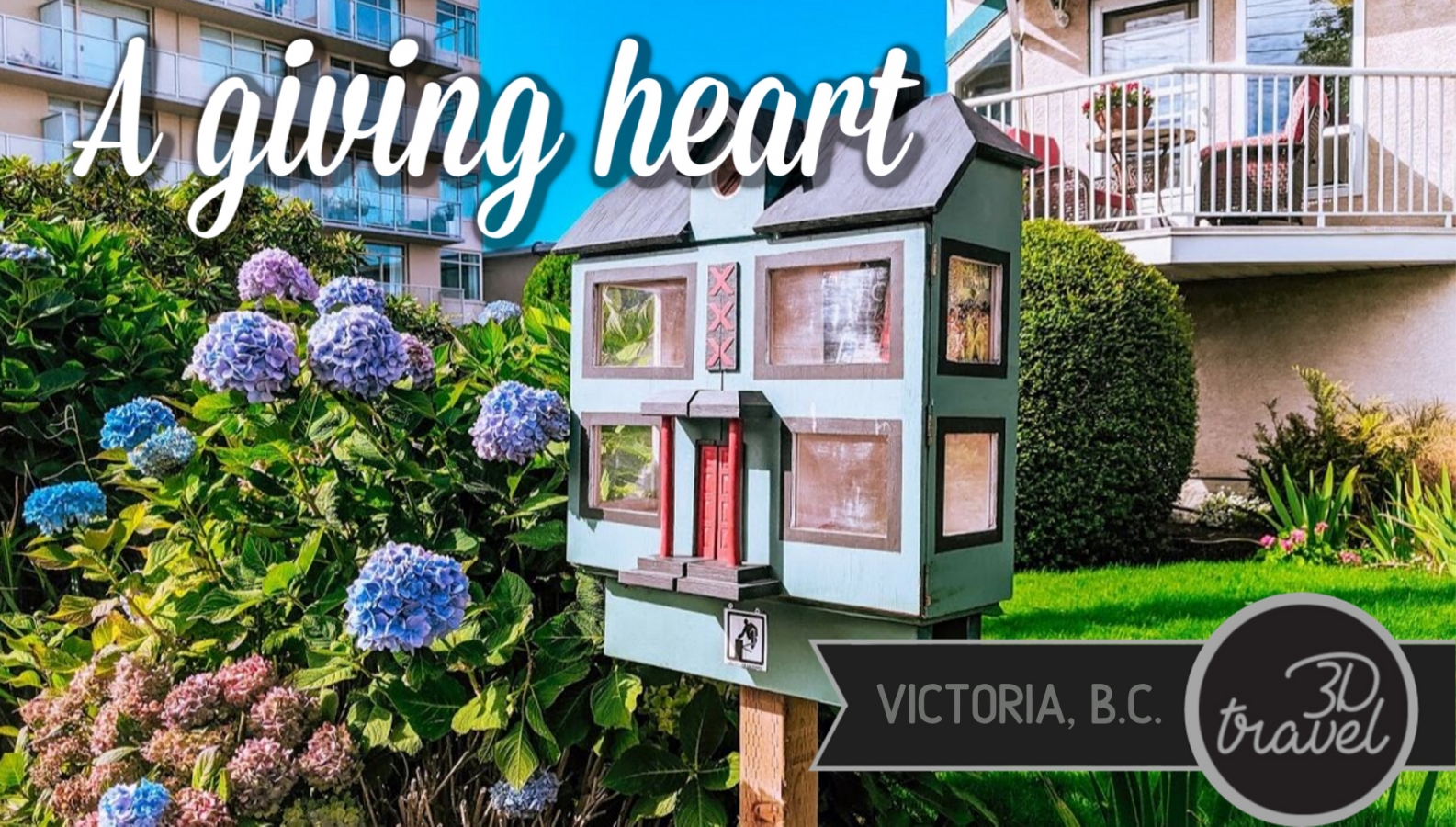 As I had stepped past Hannah to work my way back, I called her by one of her nicknames - "Banana" - and neither of us thought anything about it. But that was all that was needed for the entire front of the bus to tease her and bring my girl into the circle of conversation for the entire bus trip.

And they were off! It couldn't be more clear this small comical observance was an opportunity to interact and charm the newcomer to the bus. Hannah was teased and complimented, cajoled and brought to laughter many times. And when we got off - me in the back and her in the front, there was a long pause as she stepped back to let everyone else go first. Remember. she was probably the youngest person riding that day. While I waited, I began to have a moment of concern that she'd move forward to the next stop and leave me behind, since I couldn't see her.

"Hannah?" I called from outside the door while I stood on the street, not knowing she was busy continuing conversation with the crowd of Canadians. "Oh, she's coming!" answered three ladies who'd gotten off first. They smiled and reassured me, again like old friends. I watched as all the ladies exited before the gentlemen, with my girl coming right at the split. She was followed by a crowd of animated gentlemen who then gathered their ladies and headed down the street.

Quick goodbyes from Hannah's new friends, and we were alone together again, both with our stories to tell. We stopped walking and hugged one another. What a joyful change had been made in us! What a gift these people had given. And all it took was being a bit lost, some kindness and consideration and we were prepared to suddenly have the best day ever.

Some days I want to forget, but Hannah & I plan to remember this one forever. Thank you, friends from Victoria. We will be back!