It's a Small World Nursery 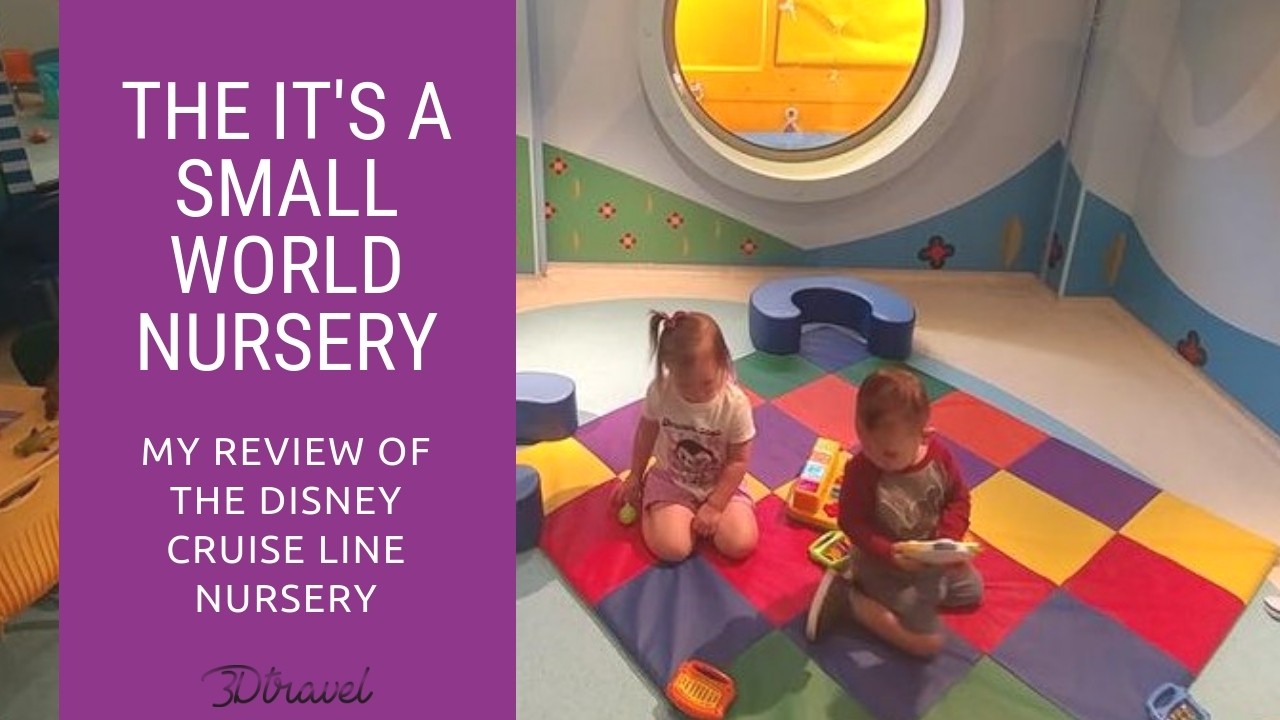 When planning a cruise vacation, the idea of bringing toddlers can be slightly nerve-racking.  As parents, our biggest concerns are their safety and making sure they are having a great time.  When we sailed on the Disney Fantasy, we made sure Kat and Scott (who were 2 and 1 at the time) had plenty of reservations for It's a Small World Nursery. This was the best decision we could have made, both for the kids and for my husband and I as well.  This is what we thought about It's a Small World Nursery! 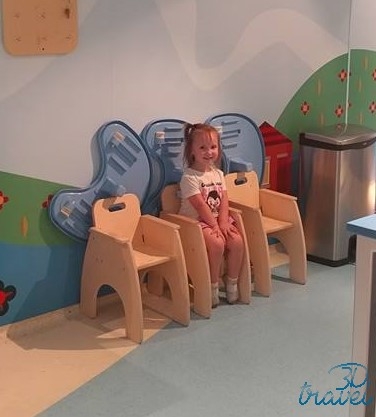 It's a Small World Nursery can be found on all four Disney Cruise Ships - the Magic, Wonder, Dream and Fantasy.  Each nursery is located on deck 5 next to the Oceaneer Club.  The nursery is for children ages 6 months to 3 years, as well children who might not be potty trained yet.  The nursery is an additional charge, and when we sailed in October of 2018 it was $4.50 for 30 minutes-$9 an hour per child.  However this fee covers all of your child's needs, including diaper changes and snacks.  There are multiple play areas, TV's playing Disney Jr., changing tables, and high chairs.  There is also a special bathroom for little ones, and a room full of cribs for nap times.  The nursery does take reservations prior to sailing, and you can book times in 30 minute increments. 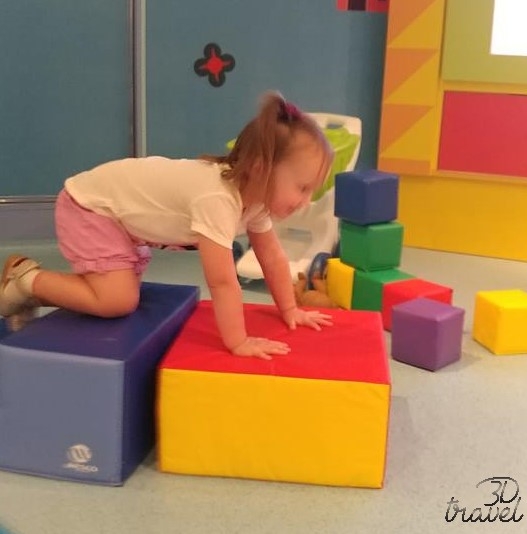 The nursery on board has special check-in procedures.  Before you even board your Disney cruise, you will be able to fill out paperwork during your online check-in regarding your children's care.  You will be able to give drop-off and pick-up permissions, create your password for pick-ups, specify what meals/snacks can be given, and even note any allergies or medical concerns.  If you don't fill out this information prior, you can fill it out once on board.  Upon your first visit to the nursery, you'll meet with the cast member in the lobby and your little ones will be officially registered into the system.  The nursery cast member will give you a small bag as well as a magic band for each child.  Now, they will charge your stateroom a fee for the magic band, but this fee is reversed once you return the band to the nursery at the end of your cruise.

Every time you check your child(ren) in for their nursery time, their assigned magic bands will be scanned, and they will confirm your identity using your key to the world card. You will also fill out a quick form that will let them know if there is anything they need to be aware of that day-child is fussy, very tired etc. Once they phone into the play area, you will take your child(ren) to an entrance gate where a cast member is waiting to take them in. No one other than the children and authorized cast members are allowed beyond the gate into the nursery for the children's safety. Each stateroom comes equipped with two on board phones, and if anything happens that requires a notification or update they will immediately call or text the phone. When it is time to pick up your little one, they once again verify your key to the world card, verify the verbal password, and then will call into the nursery to let them know you are there to pick up your child(ren). You are also given a detailed report of all of your child's activities and behaviors, and if they had anything to eat. 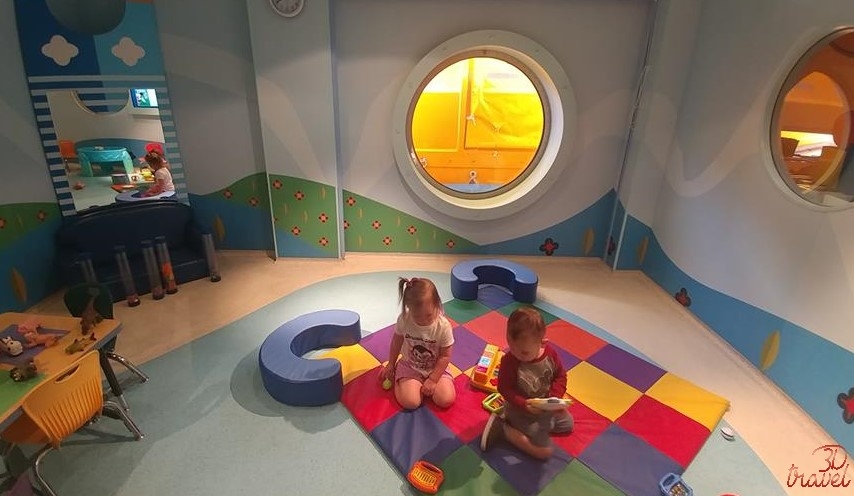 Kat and Scott on one of the play mats. 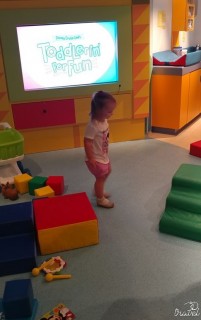 By now I'm sure you're wondering how I have photos of Kat and Scott at the nursery if they don't let parents past the gate. Just like the older kids and teen clubs on board, the nursery has open house hours. The most common (and one we attended) was on the first day of the cruise right after we boarded the Fantasy. It's a Small World Nursery opens up to kids and their family's for a few hours, allowing us to see where our kids will be playing during their nursery time. It also helps you get to know some of the nursery cast members, and see how great they are with the kids. 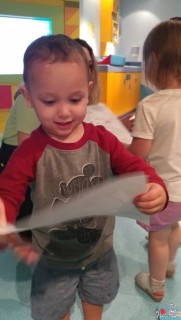 Scott was so proud of his picture!

Unlike the older kids clubs on board, the nursery has no scheduled activities. Instead, everything is based on what each child wants to do. So one child may be coloring, while another wants to play with blocks. So this open house time is a great way to get your little ones excited to come back to the nursery. You can also complete your child(ren)'s registration during the open house hours. 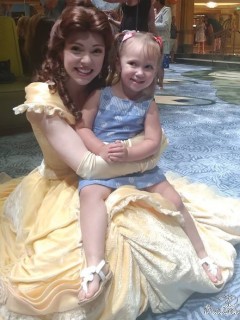 Kat getting her wish to meet Belle!

​Something I thought was absolutely amazing is that our favorite Disney characters visit the little ones in the nursery.  During the open house, Kat and Scott got to spend some one-on-one time with both Roadster Mickey and Doc McStuffins.  Since no one else was at the open house at the time we were there, the kids had them all to themselves, sailing with Mickey and coloring with Doc McStuffins.  Character visits continue throughout the cruise, but you never know when, or who, will visit.  There is also never more than 1 character in the nursery at a time, with the exception of Chip and Dale.

My favorite character experience on this entire cruise actually happened on an evening when I went to pick up the kids from the nursery. Kat had slept through our entire dinner, and so she wasn't able to meet Belle in between dinner and their nursery visit. So she was very upset on our way up to the nursery. When we went to pick up the kids later that evening, Belle was on her way into the nursery-but because Chip and Dale were already inside, she left to visit another area of the ship. Because Kat and Scott were the only children in the nursery, Chip and Dale escorted them out into the atrium, where we saw Belle waiting downstairs! So not only did the kids get awesome play time with the chipmunks, we were able to take the kids downstairs to meet Belle. They got lots of hugs, and she even remembered them from upstairs. Then as we left to go to our stateroom, we ran right into Tiana! So not only did Kat get to meet Belle after all, she also got to spend some time with her other favorite characters. She was so happy, and even Scott loved getting to charm the princesses! 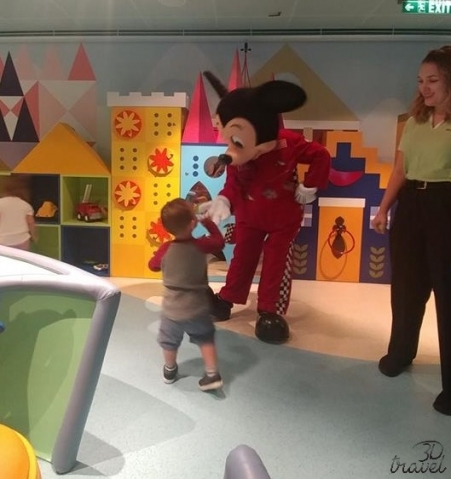 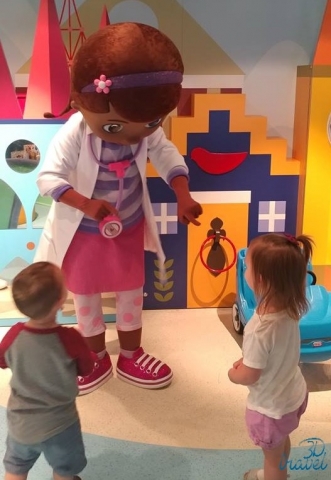 I will admit, I was a little apprehensive our first official drop off at the nursery. We had just gone through Hurricane Michael, and Scott had developed serious attachment issues due to the stress of evacuating, to the point that if I was more than 2 feet away from him, he would freak out and scream non stop until i held him. So not being able to take him into the nursery myself was a little worrisome. But I didn't try to fight the procedure, and just reminded the cast members of his attachment issues. Fifteen minutes after the drop off, we received a text to our on board phone that Scott was still a little upset but that they were working with him to try and calm him down. Fifteen minutes after that, I received another text message saying that he was happily playing. I loved the fact that they took the time to let us know how Scott was doing, because it made it much easier for me to relax and enjoy the time with my husband and the rest of our family. 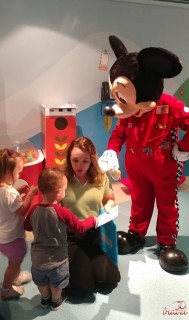 We also loved the fact that nothing in the nursery is forced.  The cast members were great at identifying each child's particular needs, and tailoring an individual experience for them.  And the character visits made this nursery even more special and shows that Disney makes sure even the youngest visitors get a magical vacation.  While you will have to budget the additional cost of the nursery visits, we found it comparable to what we've paid for daycare back home.  But like everything else, Disney took the idea of Daycare and transformed it into a magical experience, both for the kids and us parents.  We highly recommend using this amazing nursery on your next Disney Cruise Line vacation.  Stay tuned for more from the Toddling Travelers! 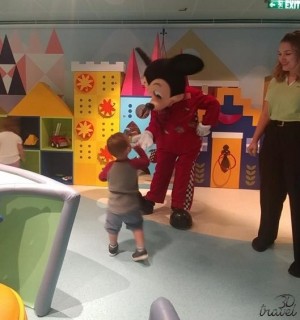 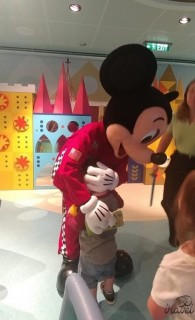