The Italy Miracle: Part One 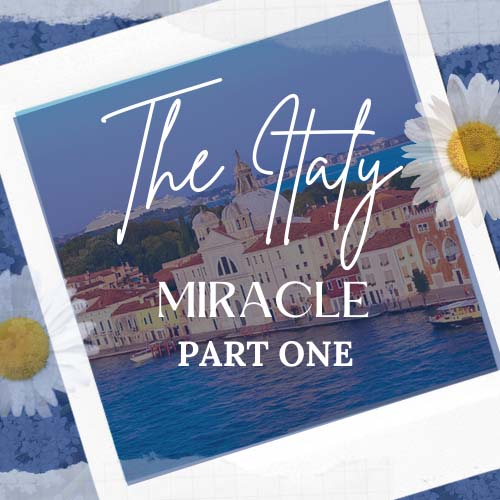 Just a few years ago, God gave my mother and me a miracle trip to Italy with Adventures By Disney. We got to have an experience unlike any we have ever had and unlike any since. 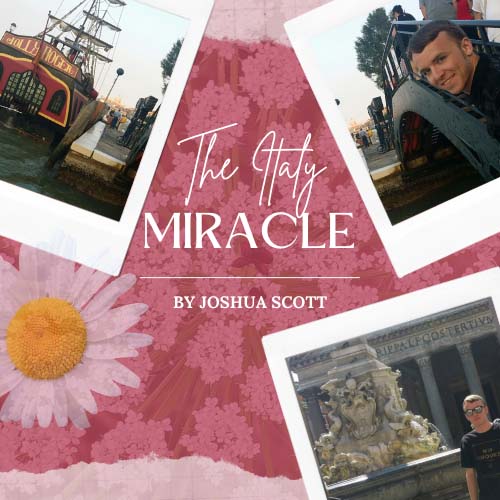 Back in the summer of 2015, when I was 17 years old, I had already been to Disney what felt like many times. I knew my way around all the parks, had been to both coasts, on all of the Disney ships, and made stops at Universal Orlando as well. Thanks to my mother's success in the travel industry, and the many blessings from God, my family and I had been able to afford all of these trips. However, as I am sure you know, there are some other more luxurious destinations and experiences that Disney offers. Aulani, for example, is somewhere I have yet to be able to visit. In 2015, Adventures By Disney, or ABD, was something I imagined for wealthy or retired couples. Maybe with the help of Disney, discounts, and a less expensive destination, I might be able to leave the country with ABD before my future kids went to college. I never thought that I would be able to go somewhere like Europe before going to college myself.

Like many high school boys, I enjoyed playing video games. One series, in particular, I have spent hundreds of hours playing. In this game, you play as a young Italian exploring and discovering every inch of the cities of Rome and Florence in Italy. The maps are absolutely massive and the scenery is beautiful. It’s set in the early 1500s and loosely based on recorded history, with some fantasy woven in. I was enthralled with the beauty and escapism of the game, and would always excitedly show my mother or father when I found somewhere new or unlocked new abilities. Playing so often also got me interested in Italian culture and history. I decided to learn about the history of Rome and the many Caesars. I listened to Italian music, learned about their art, researched their architecture, and generally anything else that came my way.

During this time, my mother had a seat on a Disney-operated board called EMTAC. This is an invite-only board for travel agency owners with a 2 year limit for those on it. From what I understand it’s highly exclusive and an honor to even get invited to join. I didn’t know a whole lot about it, but my mother was excited and I was proud of her. One of the things EMTAC will do is send its members to different Disney locations to train and experience the same things they will sell to their clients later on. I didn’t know this at the time, and after all my research into my new interest, I began telling my mother how much I wanted to go to Italy. I told her about the culture and the language and daydreamed out loud about all the places I wanted to see. I knew it would take nothing short of the Lord himself to send us there, but it was still so much fun to talk about. My mother seemed to have the same thought as me, so she told me to “pray for Italy”. She told me to pray that I can go someday.

After only a few weeks of praying and waiting, my mother came to me with some news. Not only would EMTAC be sending her on a trip, they would be sending her to Europe with Adventures By Disney. They were sending her to Italy! Can you believe that? Of all times, and of all things Disney they chose ABD. Out of the 25 destinations ABD offers, they chose an adventure in Italy. What’s even more amazing is, they were allowing my mother to bring a guest with her. She told me I could go to Italy. I didn’t know what to say or think. Praise God for His blessings and the crazy personal gift that I was being given. I was so incredibly grateful and overjoyed with the very concept of leaving the country, let alone Italy! My dream travel destination had been put in my lap, and I didn’t have any idea of the experience I had waiting for me.

A couple of months pass, and it’s finally time to leave. I fly away from my home in Texas and settle down for a lovely 12-hour flight. We flew a layover from the states and landed in Rome. The flight itself was a strange experience. We took off in the evening then saw the sunset, rise, and seemingly begin to set again right before we landed. We left the plane to find out that it was actually 10 in the morning. It really felt like we lost an entire night somewhere in there. Regardless, we were in Rome and we were so excited. Our first ABD representative found us in the airport and guided us on where we needed to go. We left the airport in a private car and I was able to get my first look at the beautiful city of Rome.

I was so tired and I couldn’t believe I was actually there. I was driving between new and ancient buildings gawking like a tourist at everything. There were beautiful buildings and amazing stone streets. I watched all of the mopeds and tiny cars zip across breathtaking bridges over long waterways. Everything looked exactly how you would imagine it and I felt like I was the young Italian from my game. I couldn’t wait to drink in the city in every way that I could.

Our hotel was a high-end, 5-star location that we could never afford on our own. From the moment we got there, we knew we should savor every second of our once-in-a-lifetime experience. After checking in and meeting the other board members, we were to get some food and then head out on our first tour of the city. If you don’t know already, I was diagnosed with Celiac several years ago. Essentially I have to eat gluten-free for the rest of my life. In the research I had done, I knew that Italy and Europe as a whole was a generation ahead of the United States when it came to eating gluten-free. I knew that it would be easier to eat there than back home, but I did not know how effortless it would be. Everywhere I went, all I had to do was say “Gluten-free please” in Italian and they would know what to do. The best comparison I can make is that over there having a gluten allergy is like having a peanut allergy in the States. Everyone knows what it is and everyone is prepared for it.

With the dietary issues out of the way, and with our new perspective, we set off to explore Rome. There are many methods of transportation in the cities of Italy, but I have to say that walking is my favorite. From the street level, everything seems so close and yet so vast. Standing in front of the Pantheon, surrounded by shops and cafes, feels like you’re in another world entirely. With our group, we got to visit the Colosseum, St Peter's Basilica in the Vatican, the Trevi fountain, the Spanish Steps, The Piazza Navona, and more churches than I can remember. So many times I found myself standing right where I had seen so many pictures of and walking in the places I read about. The feeling is almost indescribable.

Hands down the best experience I had in Rome was in the Sistine Chapel. I got to see Michelangelo's masterpiece in person for the first time. If you have ever been when it is open to the public, then you know how it is always full and always busy. At least, that’s what I was told by our tour guide. When we arrived we found out that the Chapel was closed that day. We had the whole place to ourselves. The doors were closed behind us and we were left to gaze in silence. I was able to lay on the floor of the Sistine Chapel and just marvel at the beauty above me. Very few tourists have had my experience, and the trip to Italy would have been worth it just to have that.

I have so many more stories, and I could write a small book on everything I experienced during my short time there. I could write about the cafes in Florence or the pizza we had in the shadow of the Colosseum. I could tell you all about the endless rolling hills in Tuscany and the tiny storybook village we visited. I could give speeches about Venice and the feeling of being in a floating city, and I might someday. Right now I want to finish by remembering that this trip was a miracle. The timing was perfect and the trip itself was more luxurious and immersive than anything we could have done on our own. For maybe no other reason than to bless us, God gave us this wonderful trip right when I had the thought and dream of Italy in my mind.