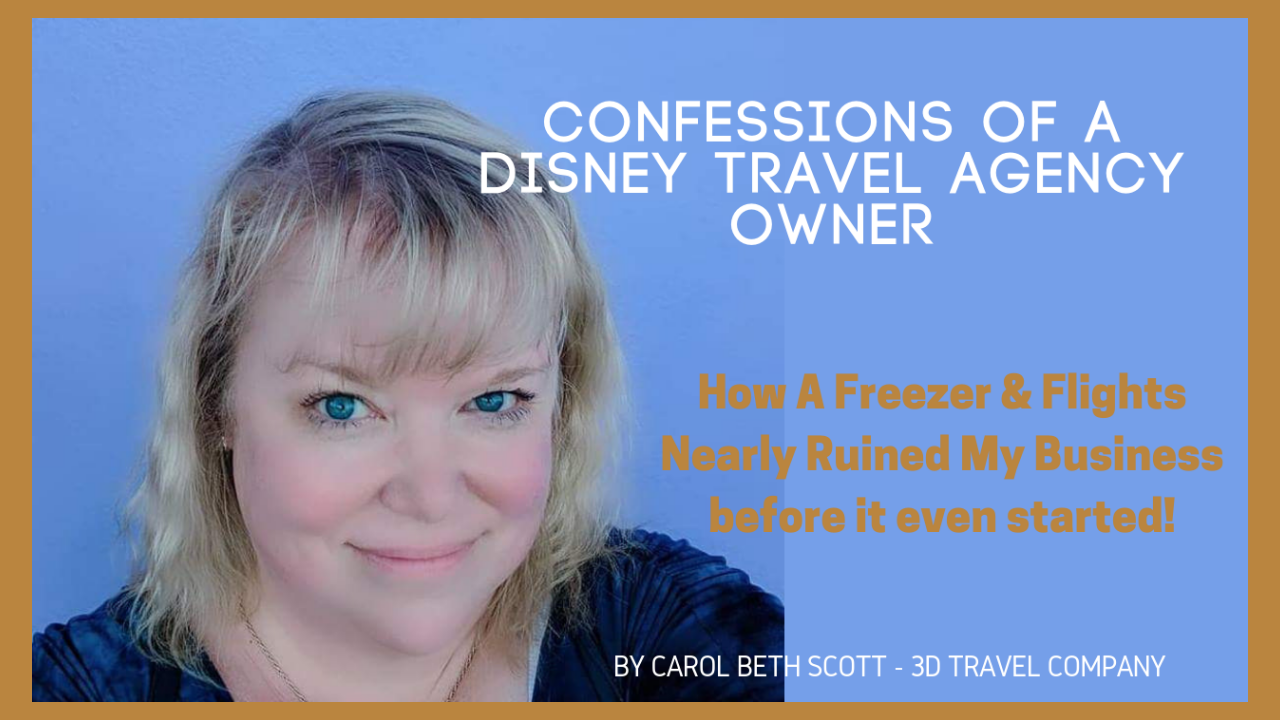 I tried to set a record for making the most mistakes in the shortest amount of time.
I MAY have been somewhat successful, but I was DEFINITELY too stubborn to quit!

As Always, we must start with A Disclaimer

While I call myself a "Disney Travel Agency Owner" in the title of this series, it's important you know there is NO such thing! I own an agency which specializes in Disney Destinations & Cruises. Much like we grab a "kleenex" when we really mean tissues, "Disney Travel Agent" is a part of the venacular. I invite you to read all about why using an agency which claims to be a part of, employed by or otherwise on the inside track with Disney is a bad idea. LATER! First, read the rest of this article. I wrote it just for you.

You're going to want to reassure me when you start reading this chapter of my journey, but by the end you'll just be shaking your head at how many ways I can screw up. It's not so much "how does she do it?" about my success that you'll marvel about. It's more of a "How in the world did she KEEP trying, despite failure after failure?"

And truthfully, I don't know. What gives some of us internal motivation, when others around us choose to quit? On a personal level, why do I blow some endeavors out of the park, get up the 1000th time and try again, and with others I shut down at the mere fear of failure? I wish I knew! But one thing if for certain - I was going to make 3D Travel A Success. Of course, I only know that in retrospect.

I began without a website, a dedicated phone number or email address, had no money for business cards, no connections and I lived out in the actual middle of nowhere. I didn't exactly have a lot on my side. Not only that, I had recently lost much of my extended family and friends, as they cringed in the never-ending path of pain we were still on, as we healed from the attacks made on our boys. I was as isolated as I'd ever been, and certainly as I ever hope to be again, in my lifetime.

But just like the way I cheer myself up when I'm on Facebook and everyone seems more successful and happy than me, so I motivated myself when it seemed everyone I knew about was more capable and confident than me. I focused 100% on what I was GIVING, instead of what I was RECEIVING.

To keep my laser focus, I made the decision to give away 50% of every dollar that came in. Because we were fronting the overhead and I was planning a group trip, this meant that I was actually losing money, something I did year after year after year.

But let's go back to the very beginning, before any type of success was even in sight......Let's visit the BIG FAT FAILS I used to pave my path to success.

From Finances to Freezers

PREP FAIL
I began by emailing, calling and visiting as many people as I could, to get the word out about my little venture. I was thrilled beyond compare when 86 people wanted to book as part of my first group trip to Walt Disney World Resort. At the time, Walt Disney World had packages called "DreamMaker" packages, and the best price I found for my group was through the Disney Youth Groups department. We worked together for months and I had many families booked. Then, the very first year of Free Dining came out, along with brand new packages called "Magic Your Way". I was completely blindsided and unprepared. Family after family cancelled and rebooked directly with Disney, and with each one I lost commission and money on my investment. I watched my group of 86 dwindle to a group of just 3 families who were willing to let me take on the learning curve of booking these new packages, with their Free Dining included. All of a sudden, I wasn't leading a large group. Instead, we were one of 4 families, headed to Disney at the same time.

ATTITUDE FAIL
But that isn't the worst part. Not even CLOSE. Instead of waiting until my frustration and hurt feelings subsided before sending out an email, I composed one to the entire group and I let 'er rip. I told them how sad I was they all jumped ship on me. I let my feelings show. I was not professional and while I wasn't the worst version of myself, I certainly wasn't my best. It still embarasses me to remember that email. It's almost unbelievable how many came back and booked with me, the following year.

FLIGHT FAIL
As much as I regard myself as being capable of being completely self-taught on nearly any subject, I had one gaping hole in my education as I began to book people: It was airfare. I thought I knew what I was doing, but I made a large mistake on a large group booking, and stayed up an entire night waiting to hear if the fares had been ticketed. If they had been, my business would have failed immediately and I still have no idea how we would have fixed my $8000 mistake. I was sick with fear, but somehow it all worked out. Thank you, God!

FREEZER FAIL
While we were a small group headed to Walt Disney World, of course I was still excited! This was only my 2nd trip to Disney with my entire family, and I couldn't wait to go. But, then.....

A few months prior to our trip, we decided to move an upright freezer up a flight of stairs. My (otherwise wonderful) husband, David decided we didn't need to lash/tether the freezer to the dolly/hand truck before pulling it up one step at a time. He stood above the freezer. I was underneath it. Looking up at him and around the freezer, I begged some reassurance. Couldn't the freezer fall on me? Absolutely not, he said! He was holding it in. Tight. You know what's coming next.

About halfway up, David lost control of the freezer and I saw it begin to fall toward me. I turned around and jumped out of the way as far as I could. My leg didn't make it. For years, we were the owners of a freezer with a great dent in it, the shape of ME. In that moment, I lay there with a Firefighter/Paramedic/Eternally skeptical husband telling me he was sure it wasn't broken.

We couldn't travel with 3 small children, plus wheel me around. We cancelled our own trip. Could I feel more like my first group trip failed? Probably not!

A FRENZY OF FAILS

While I'm not proud of my multiple fails that essentially caused me to need to completely restart my business plan, at the dawn of year two of 3D Travel, there was something I did well. I took instruction from anyone willing to give it to me.

"Carol Beth, that's not how you should do that." - Many businessmen in my life stepped up and offered me unsolicited advice to help me polish my business venture. From formatting a document to holding a phone call; From correspondence to licensing, these men stuck their necks out and risked rejection with their advice. I lapped it up like a parched poodle. I learned 1000 little things from my fails.

Many days, I went to bed with a mix of stress and exhaustion, as I had BIG fails hanging over me, combined with that day's little fails plus no trip to look forward to and a broken leg hurting more than I thought it should. But with each fail, I made a decision.

Learning How to LIVE my Beliefs - One Day at a Time

I always learned the hard way, but once I learned it, it STUCK!

At least, there's that.

As I stretched myself forward, instead of shrinking back from the demands of my new venture, what I learned was mostly about myself.

I learned I could take instruction, even when it stung my pride. I cared more about eventual success than being right in any given moment. And guess what? I was not usually right. I was usually wrong.

I learned I really could care more about people and their life's journey than whether or not they liked me, as I helped them. I learned to make other people's trips all about them, and not me. (Remarkably hard for me to do, I'm sorry to say.)

I learned physical pain really affected my positive attitude. When I was doped up and hurting profusely from the broken leg, it was best for me to just sit there and shut up. Really.

I learned to WAIT before sending that email. (Usually, they're never sent.)

I learned I felt less isolated when I took risks. I became part of the greater human experience, when I put myself out there and took a chance. My failures and (hopefully) eventual successes all made me a part of the broken, fragile and amazing human race, and it was ALL okay.

I learned (again) that the only things worth doing in this lifetime take risk, pain and rejection to come to fruition.

I learned I COULD. It was shocking.

​Something important to acknowledge in this moment - I didn't stop feeling like a Big Fat Faker.

This isn't new. I'm still not sure how I'm qualifying to be a grown up, and I've been doing that a LONG time.

As an entrepreneur, an owner, an agent, a founder......they all felt like I was playing pretend & that feeling didn't stop for many years. Even after I began to accumulate a series of successful relationships, years and projects, I still felt like someone would stand up and point at me and say "Just what is SHE doing here?"

Yes. I suffered from Imposter Syndrome for much longer. I think, except maybe for the most cynically pridefully conceited amongst us, it's true for everyone. Everyone feels like an imposter in their own life.

But you know what? Even though I felt inadeguate, I did it anyway!

I'll be back next week with more fails, successes & the beginning of my actual relationship with Walt Disney  Travel Company. THEY FINALLY NOTICED ME! But now without first demeaning, ridiculing and ignoring me. There's much to say. Stay tuned.

Scroll down and click on photos to find past and future articles of this same journey. I promise to fail a LOT & make you feel GREAT about yourself! 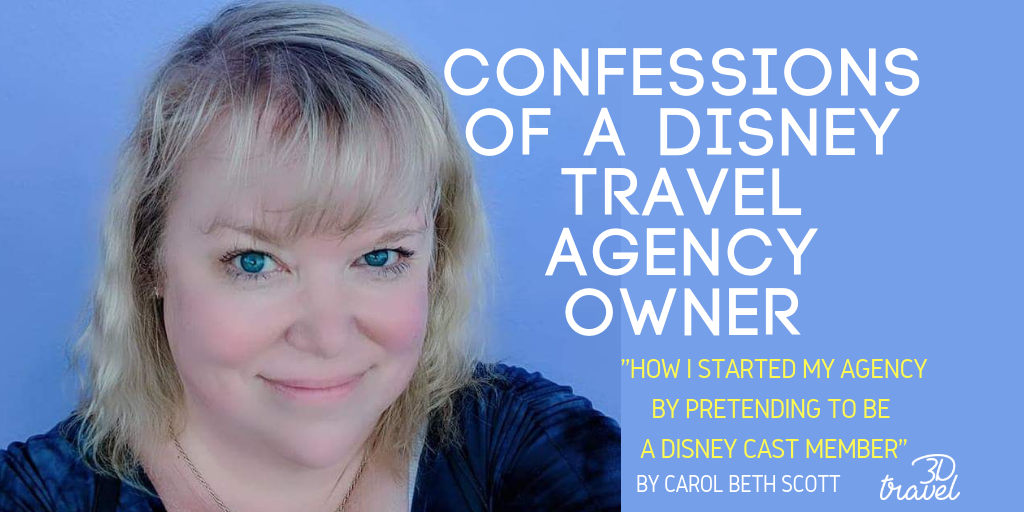 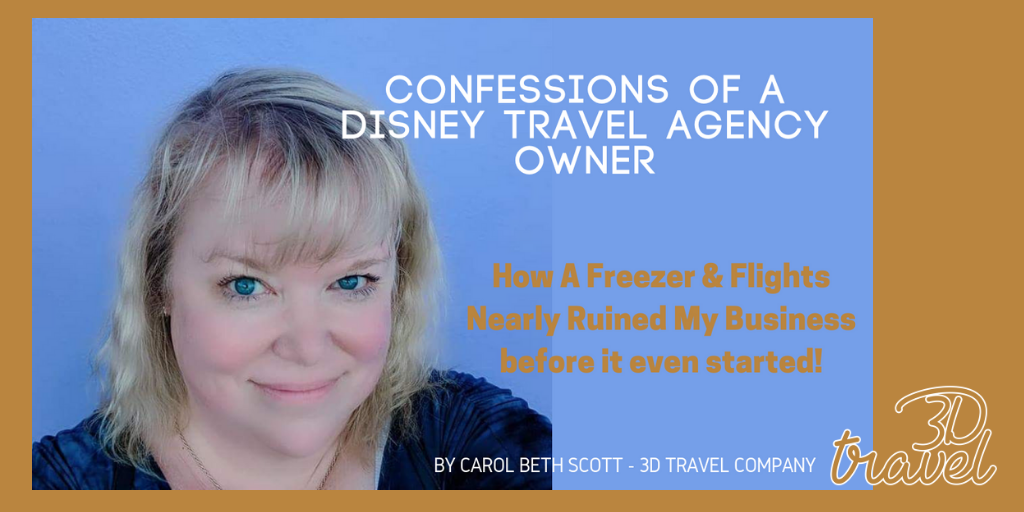 Share this article & spread that fun around!
Tags:
Disney Travel Agent Owner Healing Disney Business Owner Entrepreneur New walt disney world
Traveling After Disaster Strikes
How I Started my Agency by Pretending to be a Disn...

#My3DTravel1st l Where will YOU go this year?